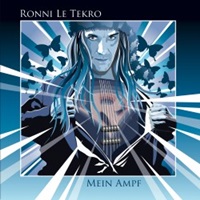 TNT guitarist Ronni Le Tekrø has released the first in a trilogy of solo albums with "Mein Ampf" – and prepare yourself for an odyssey that is very different from his hard rock work through the years. I would say this is psychedelic influenced space pop/rock, a lot of the influences coming from the 60’s and 70’s heroes that helped mold his ideals in music.

Everything from David Bowie to The Beatles comes to mind when taking in the spacey vibe of tracks such as "The Way We Feel" and "You Know and I Know", while the closer "Love Is Not Money" probably has the hardest rocking main riff that the harmony background vocals perfectly contrast against. Ronni handles the vocals on this release as well, and his softer, psychedelic nature is perfect for this material. Those who wish to hear some of his lead mastery need to check out "I Ronnie" and "Why Cry" and you’ll understand quickly why he’s been regarded as one of the best axe men not only from Norway, but in all of the hard rock community.

Stretch your mind and "Mein Ampf" has appeal purely from a musical standpoint- solo records are not supposed to be carbon copies of what artists have previously delivered but extensions of their personality and offering a new side to their personal legacy. I for one applaud Ronni, as this is an 11 song effort that may not be hard rock or metal, but still engages the listener and showcases his broad tastes and abilities.