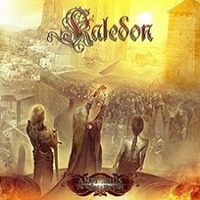 Pumping out power metal since 1998, Italian act Kaledon are fans of the concept record – developing a six part "Legend of the Forgotten Reign" series that took up all of the 2000’s for their discography. Their eighth studio album is "Antillius- The King of the Light", a leader from the year 1301 so expect another story theme that runs throughout these 12 songs. Dual Helloween-like guitar harmonies and keyboard virtuosity gives "New Glory for the Kingdom" the uplifting aura and happy mead-hall melodies that ardent followers of the genre love.

Many could even dance a little jig to the almost flute-like keystrokes from Paolo Campitelli on "The Party", although the vocal melodies seem a little contrived and following the chord progressions too much, making the campiness factor rise. It makes you wonder how seriously Kaledon take this style, as it can border on bombast very easily a la Rhapsody (Of Fire). Proper female melodies add the siren quality necessary for "Elisabeth" to give your ears some serenity, while the horse hoofs that open "The Angry Vengeance" prepare us for some strong guitar oriented, double bass salvos as we go to war slaying dragons to save the world.

I do not dispute musical prowess within the Kaledon ranks. Guitarists Alex Mele and Tommaso Nemesio can wield a strong axe foundation that keeps these arrangements moving along, and drummer Massimiliano Santori doesn’t disappoint in all phases of percussion, speedy or in more measured control. The acoustic touches to "My Will" even bring a lot of their cultural spirit and classical heritage to the forefront. But these hour-long records can be a test of wills, and you often wish that some of the thematic set ups or long-winded songs (the almost nine minute closer "The Fallen King" comes to mind) would be tightened up to make for a slightly stronger yet shorter final recording.

As such "Antillius- The King of the Light" is an adequate offering, but nothing that we haven’t heard thousands of times before.