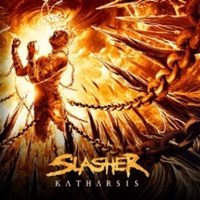 We all know the potency of Brazilian thrash since the breakthrough of Sepultura – and here is another act hoping to crush the competition through their second full length "Katharsis". The five piece deliver a style that certainly has those gallop riffs and up tempo snare/ double bass hits that are necessary requirements for neck snapping, yet know when to submit to a groove template that can get the crowds whipped into slam dances.

Paulo Skeeter has a caustic roar to his word assault, not that dissimilar to the Robb Flynn’s or Phil Anselmo’s of the world, check out "Overcome" or the frenzied "Hostile" for some blood curdling, adrenaline fueled action. There are times when the ride cymbal work and slightly off time fills from Taddei Roberto can give off an older Slayer vibe, yet I think there is more to Slasher than merely re-hashing the best of the Bay Area sound. Paying tribute to their own metal heritage, the band tackle a cover from Brazilian heavy metal band Mosh with "Suffocated", off their only album release "Private Place" from 1995, something that gives the record a little more of a straight rock meets punk vibe.

The band certainly gravitate to a lot of the 1990’s modern staccato aspect during certain tracks, made important during the Machine Head / "Burn My Eyes" era for "Face the Facts" and the 6:52 closer "All Covered in Blood". So if you are looking for something straight ahead in thrash genre, "Katharsis" has a little more of that anger and punch coming from a younger generation of musicians and be aware. I don’t think it will negatively impact your overall enjoyment, as this isn’t ‘metalcore/ breakdown’ music, just more sonically crushing.

9 tracks, 40 minutes – Slasher have the right tools to appeal to a decent cross section of modern metal and thrash audiences.