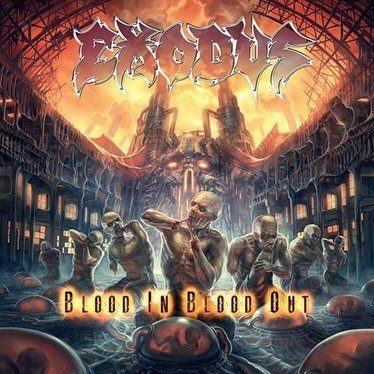 Exodus are back with a new assult on your eardrums and this time it´s new/old vocalist Zetro who is responsible for the yelling.
"Blood in, Blood out" is quite an entertaining album with a lot of cool riffing. The problem after a couple of spins is that I´am not hearing that signature sound that Exodus (and Gary Holt) is famous for. The songs/arrangements all work out pretty well and there´s a lot to listen to but that extra for dessert is missing.
Zetro is a seasoned vocalist and it was quite surprising when I read earlier this year that he was back in the fold, especially since his replacement worked out quite well.
"Blood in,Blood out" is a massive thrash album that have almost all that is required in both the speed and agresiveness departments. The production is nice enough to give all the instruments their fair chance against Holt´s guitar riffs.
A great album that I will for sure listen more to in the future but as mentioned, it´s missing that little bit that makes it Exodus great.