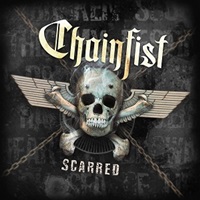 The second album from Danish heavy metal/ hard rock act Chainfist "Scarred" is another in your face affair that should appeal to fans of early 90’s Metallica, a little Avenged Sevenfold, and possibly current modern rock fans. "Scars of Time" has a lot of that groove/melody combination desirable on North American radio stations in the ‘rock’ format, and Jackie Petersen’s fierce yet addictive melodies vocally have more gusto than the average singer these days.

Guitarists Michael Kopietz and Thomas Hvisel add in a little melodic death metal trilling before the lead break on "1000 Ways to Bleed", and I think their overall teamwork concept makes "Know Your Hate" and "Mass Frustration" addictive highlights that cause me to return to this record on a consistent basis. Chainfist will not be an act that breaks the mold in this genre – they just play to their strengths and set a good example for constructing dynamic songs in the pocket. Chanting gang background vocals, little spoken word/ narrative parts, solid rhythmic grooves – the smaller things that separate the great bands from the average ones, this quintet really go the extra mile to deliver.

I even enjoyed the acoustic version of "Black Rebel Noise", as stripped down this is a very emotional track and could be a future hit, highlighting Jackie’s strong vocals. Their debut album "Black Out Sunday" was a little too predictable, and as a result I hoped they would step it up in all facets. "Scarred" has indeed done so – and could be another act to put Denmark on the map beyond Volbeat.

DEVILMENT – The Great and Secret Show