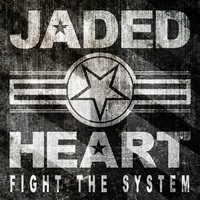 Veteran German/ Swedish hard rock band Jaded Heart doesn’t seem to stop their creative train from rolling down the track, as "Fight the System" is their 12th studio album in their 23 year career. Vocalist Johan Fahlberg and guitarist Peter Östros maintain the Swedish side of the quintet, while bassist Michael Müller, drummer Bodo Stricker and second guitarist Masa Eto are the German musicians. If you are not in the know regarding Jaded Heart’s discography, they’ve put forth a lot of strong melodic hard rock through the years – very radio friendly, engaging the listener through catchy guitar/ keyboard hooks, harmonies, and multi-part vocal choruses.

The sound of Jaded Heart takes equal inspiration from their own European metal heritage as well as the American hard rock scene – as many tracks have a little bit of that guitar grit and muscle that is more associated from say early Skid Row and 90’s era Metallica while the choruses and keyboard elements are more in a Deep Purple or Europe tradition. Check out two early highlights back to back with "Not in a Million Years" and "I Lost My Faith" – where you’ll get some explosive lead breaks from Östros and Eto that fuse classic hard rock tenets and neo-classical shredding moments. Then there are straight ahead songs that lob hooks left and right, the refrains and transitions logical and harmony fueled – "Nightmare’s Over" and "Crying" fit that bill, while "Polizisten" is a left-field, heavier number where the vocal delivery is in more of a low, spoken word/ rapping at times that just didn’t work for me as an oddball / different cut (although some of the guitar playing digs back into Led Zeppelin archives). And I really enjoy the first single "Control" – featuring a duet vocally between Johan and Rick Altzi (Masterplan, At Vance) and this driving rhythm/ tempo combination perfect for cruising.

Overall "Fight the System" has a modern production, giving the guitar tone a lower tuning that lets the riffs crush in comparison to their early days. You’ll get 13 songs and almost an hour of material, and I would say Jaded Heart aren’t resting on their laurels anytime soon. If you love German melodic hard rock/ metal, these guys are near the top of their genre continually.