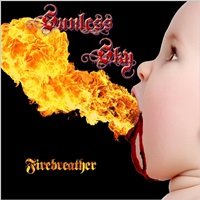 Cleveland, Ohio has always had a strong reputation for world class heavy metal/ hard rock acts – names like Breaker, Shok Paris, Purgatory, Black Death, Destructor, and Soulless making their mark on the scene domestically and abroad. Beginning in 2012, Sunless Sky is another quintet to keep tabs on, as their debut album "Firebreather" is a 14 track, almost hour long record of power metal that will surely bring out a lot of the old school generation.

This is definitely 80’s oriented power metal, the type developed from acts like Armored Saint, Helstar, and Metal Church – as singer Juan Ricardo has a serious set of pipes, definitely of the James Rivera/ Bruce Dickinson mold, willing to seek the high echelon and rise above to sustain some sinister bird call notes on "Subzero" and the twin harmony laden "Pandemonium". Musically Sunless Sky prefer a lot of the back and forth riff charge and doubling up that just promotes devil horns, audience chants, and furious air instrumentation simulations. They mix things up as far as arrangements and types of songs, you’ll get the anthem oriented efforts like "Human Time Bomb" and "Deathmachine" against the more moody material like "The Whaler" or the 7 minute bluesy closer "Candys Gone Bad". Expect a number of galloping triplets, occasional darker/ doomier chord transitions, and seasoned veterans who know how to use the tools of electric guitars, bass, and drums to their utmost advantage.

At 14 songs, some could be fatigued getting through this album in one sitting – so I hope that Sunless Sky consider a little shorter album next time out. It’s better to leave people wanting more with your best material, than possibly having people move on 40-45 minutes in. Otherwise, "Firebreather" is another classic display of 80’s-oriented US power metal, and should gain kudos from a number of followers.