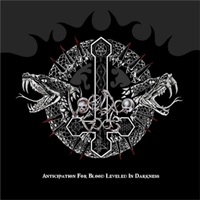 A US Death Metal supergroup of sorts, Voodoo Gods contains notables like Cannibal Corpse vocalist George ‘Corpsegrinder’ Fisher, guitarist David Shankle (who worked with Manowar for 7 years), and Sceptic guitarist Hiro in its ranks. This second album has a lot of progressive influences, especially in terms of bassist Jean Baudin who tears up his strings on worthy cuts like "Cetewayo" and "The Termination of God" where he dances hand in hand with drummer Alex Voodoo and David’s fiery shredding, almost in a power metal manner for the second half of the latter’s arrangement.

There’s a circular meets exotic nature to "The Astral Dawn- Devotion to the Great Nebula" that even incorporates cultural, electric folk elements and off-time guitar/ drum action before charging off to the speed metal races a la newcomers Vektor. Later track "Renaissance of Retribution" covers a lot of Death territory, both old and new, in terms of the picking and dual raspy/ vicious growls. Overall know that the Voodoo Gods benefit from a modern tone production-wise and that these 8 tracks aren’t all trying to ‘out-brutal’ one another.

The lyrics have a voodoo/ spiritual theme that coincides with the musical themes, and I think "Anticipation for Blood Leveled in Darkness" will have many factions of metal heads clamoring for more. According to their Facebook page, they are an actual active band and not one of those side projects that people get around to when they have the time. It will be interesting to hear how far they go together, as I love the progressive and tribal elements to their death/thrash base.

This is a record that will receive a lot of airings beyond this reviewing – the sign of a great album to me as I pick up one or two nuances every time that I didn’t hear before.