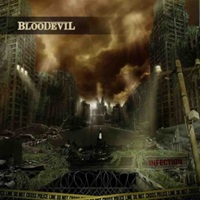 Italian thrash with groove/metalcore overtones here on "Infection", the debut album from Bloodevil. You can tell right away in "The Soul Destroyer" the band has a scattershot approach: intertwining occasional blast beats over up tempo drum parts heavy on the double bass, quick guitar picking, the right hook/groove combinations, and vocally very much like James Hetfield and others in that Bay Area class of singers. Nicking the feel of "The Four Horsemen" during the instrumental section of "Biowar" can be a tip of the cap to Metallica or a sign that originality is not a part of this quartet’s game plan.

As you traverse through the 11 tracks, you’ll notice a lot of fluid solo action between vocalist Angelo Bissanti and guitarist Salvatore Li Causi, in line with Heathen, Exodus, and Testament – check out highlight "Apocalypse" and the semi-ballad "Time For Dying" that could have appeared on Onslaught’s "In Search of Sanity" for some tasteful riffing and guitar breaks 95% of the metal world needs to study. I don’t quite get the metalcore breakdown in the transitional section for "We Will Fight ‘Til Death", as it really disrupts the riff flow and pace of the 5:30 song.

Bloodevil has to decide what direction to take their music in, drop the elements that can be bothersome and through that I think they’ll gain a better understanding of thrash. As such "Infection" has inherent flaws that are hard to overcome, despite the obvious talent at hand. Maybe the follow up record will rectify things.

THE DAGGER – The Dagger