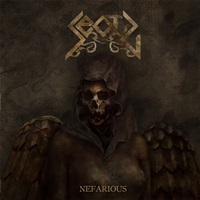 The third album "Nefarious" from Swedish death metal artists Sectu comes with yet another rhythm section change to the lineup. Bassist Johan Niemann and drummer Richard Evensand are the new musicians, expanding the band to a quartet. Never fear though- the ripping, aggressive riffs and technically savvy lead breaks along with pummeling tempos still make these 8 songs sweat soaking endeavors that all fans of older Morbid Angel, Gorguts, and Monstrosity cherish.

The quartet can equally be vicious at slower paces – check the contrasts between verses and chorus in "Perpetual Spectre", as guitarist/ vocalist Stefan Lundgren and guitarist Anders Ericson fill up the space in a doom/ Euro death manner. Richard’s drumming has a cool natural flow that even when he’s throwing down insane triplet rolls or fills that would require octopus tentacles to accomplish on "Tenebrous" or the progressively off kilter "River of Oblivion" he never loses that human touch necessary to feel the impact of death metal.

Sectu write songs of varying lengths – as 5 of these tracks are under 5 minutes and the longest "Usurper" at 8:04 has a solid 10 riffs and quiet mid-section transitional element that should keep the hair standing on edge and promote numerous spasmodic body movements from the frantic guitar bends and tempo changes. For a third album, "Nefarious" firmly establishes Sectu as a strong Swedish act performing in a slightly faster, technical realm while also remembering to inject the right musical hooks to keep this catchy beyond schooled audiences.

While I often worry about European acts tackling a more aggressive form of death metal that is very much associated with North America, Sectu should be considered one of the better bands performing in this style currently. Sure to get the blood boiling and the pit stirring when performing live.