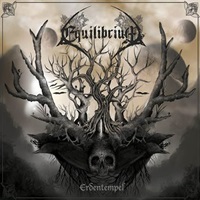 I love the half-time drum hits against the folk parts on "Was Lange Währt" – proving drummer Tuval Refaeli is more than just a human speed machine. Check out the jig-worthy "Waldschrein", the dramatic, double bass fueled "Heavy Chill", and slower epic "Wellengang" and I doubt that you won’t be moved if your tastes favor the intertwining of folk and extreme metal. Lyrically sticking to tales of their homeland and Scandinavia in their own native tongue, Equilibrium as a quintet encompass a sound that is full, bold, and highly entertaining. Spending four years on the creation of this record, "Erdentempel" seems to balance the older spirit and their recent forays into bombast to develop an addictive, multi-faceted epic metal affair.

The trick in this style is dynamic versatility – as too much of one particular element (be it speed, power, or similar tempos) can cause people to flee to another act. Equilibrium never waver in this commitment for arrangements that separate themselves from the pack- and as such "Erdentempel" I think will be a permanent fixture in their discography that fans will return to again and again. Raise your horns, gather the best warrior paint and garb, as these Germans are ready to crush their competition.