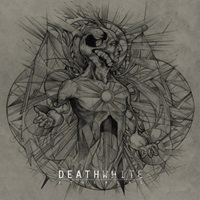 Mysterious in their lineup (no regular promo shots, no member listings), this dark melodic metal act Deathwhite formed in 2012 out of the ashes of a few well-established extreme metal acts. "Ethereal" is their debut EP offering, a 6 track, 24 minute odyssey from a US band that look to European horizons to establish their melancholic, emotionally driven material. Those who are familiar with the post- "Brave Murder Day" records in Katatonia’s discography, the heavier elements of Anathema, and Paradise Lost during their "Icon"/ "Draconian Times" streamlining will probably find favor for the shimmering "Give Up the Ghost" and forceful yet rhythmically propulsive "Feeding the Illusion".

Vocally very atmospheric in a sullen, alternative, and morose manner, the guitars shift between clean layers that can often bring a tear to your eyes and then crank up the distortion in a culturally moving platform. Lyrically exploring the pitfalls of existence and organized religion will give the listeners plenty to ruminate about, and for a premiere recording I feel that Deathwhite has a boatload of songwriting talent and established a potent platform they can build up. Even if it’s a simple way such as the repetitive acoustic guitar notes ringing out on closer "A Burden to Carry", the band realize that simplicity can often win out in this style over a multi-layered sonic assault.

"Ethereal" hints at a fruitful future for these guys – and I am hopeful that their best work lies ahead of them.