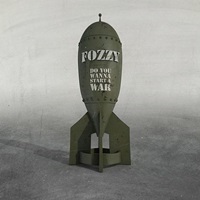 FOZZY – Do You Wanna Start a War

Notoriety gets a foot in the door, but talent level sustains a pipe dream into a career. Chris Jericho is best known as a professional wrestler, but he also has an intense love for hard rock and heavy metal. Starting in 2000 as more of a cover band, Fozzy has evolved into a full on modern, commercial metal act – gaining major support in North America and abroad. The sixth studio album "Do You Wanna Start a War" features Chris on vocals, Stuck Mojo guitarist Rich Ward and drummer Frank Fontsere, ex-Adrenaline Mob bassist Paul Di Leo, and ex-Sickspeed guitarist Billy Grey.

You’ll get 11 original songs of a modern rock/ commercial metal slant, featuring large, staccato-oriented rhythm riffs, addictive tempos made for audience pogoing/ bouncing, and Chris’ easy on the ears melodies. The slightly swinging "Bad Tattoo", semi-industrial meets modern Ozzy-fied "Lights Go Out", and White Zombie meets Shinedown effort "Unstoppable" (where Chris gets to share his high range capacity) offer enough dynamic versatility so most followers will not feel the need to skip through for fear of sameness. There are times where Fozzy digs a little deeper into the classic metal trenches, as the opening doom riff of "Scarecrow" attests to, the song also containing a few killer organ moments against the backdrop of Rich Ward’s spot on Rhoads/Iommi-like lead break.

And to no surprise, Fozzy do indeed tackle another cover – this time turning ABBA’s "SOS" into a hard rock song. The best version of this cover still remains with German melodic power metal act At Vance, but this isn’t a bad rendition, as Chris explores more of his lower register during the verses and the spacey keyboard vibe makes it more of their own before the electric instrumentation kicks in.

"Do You Wanna Start a War" doesn’t really stretch the boundaries of modern, groove-oriented commercial metal- but for Fozzy fans, it’ll get the job done, and in the end that’s all that matters to their following.