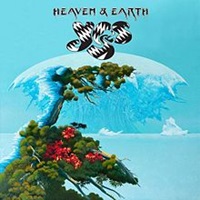 There are 8 songs and 52 minutes of music on this record, and the quintet ambitiously explore more of their quieter, new age side of their progressive rock base. Softer keyboard tones, a preference for Steve Howe to use sparse notes over fluid speed runs, and Jon conveying his melodies through a lot of his mid-range with occasional highs to mirror the grace of long time vocalist Jon Anderson. As opening songs "Believe Again" and "The Game" are pleasant if not dreamy in arrangements, Geoff’s simpler echoing lines leading the way while the latter has a good harmony balance from Jon and hints as the mastery of Steve’s acoustic and electric guitar abilities. "Step Beyond" has a little bit of a fairy tale musical theme running throughout, the vocals taking a stair step ascension during the verses and a little bit of the background work reaching back to the "90125" days of "Leave It".

Then you have material like "In A World of Our Own" that is certainly very straightforward in terms of a steady back beat and throwback feel, possibly paying homage to The Beatles in its bluesy, bouncy feel where Chris Squire and Steve Howe get a chance to flex a little dexterity in the right spots. The 9:19 "Subway Walls" is the highlight of the record, taking a funky, progressive bass line, weaving the Howe/ Downes magic around it, and after you top it off with Davidson’s voice you’ll get Yes taking their history into account with this majestic song.

"Heaven & Earth" is a nice set of material that isn’t necessarily going to be microscopically dissected, but for Yes fans a delightful work from a group steeped in progressive rock tradition.