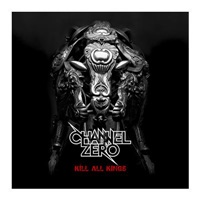 The sixth studio album for Belgian groove/semi-thrash metal band Channel Zero has a lot of commercial appeal to these ears. "Kill All Kings" features some of the best high powered melodies from vocalist Franky De Smet Van Damme – in league with what you hear from modern rock radio yet with a little more stoner ferocity. Musically songs such as "Digital Warfare", the high impact "Mind Over Mechanics" as well as moodier, heavier fare like "Ego" has the band traversing a lot of ground – bands like "The Gathering" period Testament, Pantera, and a touch of current Shinedown or Five Finger Death Punch comes into play.

Already gaining a decent amount of airplay in North America for first single "Electronic Cocaine", there is follow up material ready made for a wider swath of music fans to discover Channel Zero (I think "Crimson Collider" the biggest, as Franky channels his best Glenn Danzig on this monster guitar hook and subsequent thunderous tempo pattern). And I also appreciate the back and forth bass/ guitar action on the doomier "Army of Bugs" that allows Tino DeMartino and Mike Doling a chance to engage in a semi-playful manner, probably a future festival classic in the making. Maybe taking a 12 year break did this band a world of good as far as team chemistry and focus, because this set of songs are the best I’ve ever heard in their career.

If you can handle the fact that this is very basic in terms of chord structures and general verse/ chorus elements, "Kill All Kings" will be a heavy favorite for the twenty-somethings that don’t want to think too hard when enjoying their heaviness. Integrity and power are at heart, so if you prefer thick grooves Channel Zero more than deliver through these 12 songs.