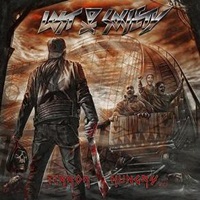 They say you have a lifetime to record your debut album and about half that time to record the follow up. In the case of Finnish thrash band Lost Society, they waste no time getting their second record "Terror Hungry" out to the public- a mere 13 months after their "Fast Loud Death" debut. Ah, to be young again, that drive and determination to unleash adrenaline to every nerve ending and prove to the world that you are worthy of attention.

Old school as old school gets, these four musicians simulate punk-like thrash maneuvers not uncommon to early Bay Area aficionados – Metallica would be proud of "Game Over", as would Anthrax and Exodus ("Bonded by Blood" era for certain on "Attaxic"). Multi-part gang vocals penetrate every chorus or important verse line to bring home the lyrical visions. Guitarist Samy Elbanna handles the microphone chores, unleashing Tom Araya-like terror screams during the opening section of "Lethal Pleasure", and then being a touch more crossover caustic on the savage head ripper "Tyrant Takeover".

Three of the album’s tracks actually eclipse the 5 minute mark, showing Lost Society’s willingness to be a little bit more evolutionary in the instrumental side of certain mid-tempo oriented arrangements. Check out the shredding lead breaks that work wonderfully next to the cultural riff strains for "Brewtal Awakening", giving these Finns more of a chance to survive beyond those who seem stuck in one gear when it comes to thrash – overdrive.

At this point in the game, "Terror Hungry" doesn’t eclipse "Reign in Blood" or "Kill ‘Em All" for the thrash Hall of Fame. But I don’t think Lost Society want to- or need to – they only hope to provide solid thrash workouts that entertain, and as such the songs succeed. Break your neck, boys and girls.