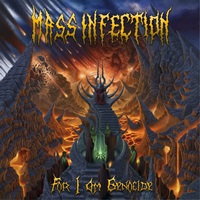 MASS INFECTION – For I Am Genocide

Brutal death metal and Greece aren’t probably synonymous terms that go together on a regular basis, but Mass Infection live up to the moniker on this third album "For I Am Genocide". Mincing no words, "Praised by All the Entities" opens in blasting fashion as the guitar whirring high notes fly by your headspace faster than stirring up a dormant hornet’s nest. The quartet even when they slow down the basic tempo (check out the lead break during "Hierarchy of the Highest Abomination") somehow still keep the double bass at peak intensity, making the deliberate snare hits from drummer George T. that much more awe worthy.

Guitarists Nick and George S. pick furiously throughout in Nile meets Origin fashion, providing a lot of the melodic moments on the record – check out the low end work on "Maelstrom of Endless Suffering" or the second half of 7 minute closer "The Genocide Revealed" and hear that this duo can be evil, speedy, and memorable. George also doubles on vocals, and his guttural bellow matches the vicious musical landscape – so fear not death heads who think there will be some clean catchy chorus to destroy the atmosphere.

9 songs in 36 minutes, "For I Am Genocide" will destroy any naysayers. Mass Infection would be interesting to take in through a live show, as I would imagine after a 45 minute set that limbs could be severed and intravenous fluids necessary to replenish all lost nutrients. North American audiences that live for speed, blast beats and insane riff changes, Mass Infection is another act that will warm your hearts.