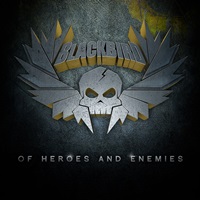 BLACKBIRD – Of Heroes and Enemies

An air of similarity reigns supreme as I take in the debut album from German hard rock quartet Blackbird "Of Heroes and Enemies". Angus Dersim is the lead guitarist/ vocalist, and the sonic outlook for these 10 songs has plenty of Airbourne/ AC/DC raw rock ‘n roll charisma through electric, 3 chord orientated structures that get in, pound through the hooks, then move on to the next dance. Settling into a mostly mid-tempo motif, winners out of the gate include the semi-boogie "Don’t Fool Me" and four to the floor title cut.

Angus’ voice has that meets LA Guns’ Phil Lewis against Brian Johnson soaked in whiskey rasp, at times a little whiner than I can handle (check out "Deuce" for prime evidence). The rhythm section of bassist Fritzi Delli and drummer Daniel Keller get the energy party atmosphere off to a blazing start on "Fire Your Guns", fluctuating between anthems and street level bluesy rock ‘n roll to the dirty "Right to Rock" ending. Ultimately Blackbird live and die by the all-mighty riff – and "Of Heroes and Enemies" has just enough muscle in "Hero" and "Ride with the Rockers" to keep my head shaking and air simulation sensors abuzz.

I’m on the fence over Blackbird when it comes to establishing a niche in a crowded field. There’s no doubt regarding their sincerity and commitment to the cause- but I do wonder though if the world needs another AC/DC-like knock off. Close your eyes and travel back 30 years as Blackbird bring their brand of hard rock across German and into the hearts and minds of all generations.