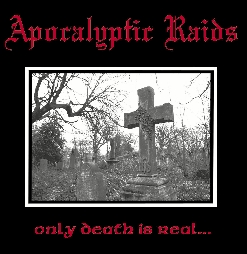 APOKALYPTIC RAIDS – Only Death is Real

Here you have the ultimate in Hellhammer worship.

Brazilian Apokalyptic Raids´s first full-length "Only Death is Real" from 2001.

Re-released on vinyl by Hells Headbangers and a sworen testemony of the greatness of the music Hellhammer released before turning into Celtic Frost (and yes, still continued to release perfect music).

This Brazilian outfit got their Hellhammer fixation down to the last coffin nail. Everything reeks of old Hellhammer, the production is monotone with the (now) classical guitar sound nailed just right, the drums are (most probably) played with the same sloppiness with added mistakes and the vocal is done to emulate Tom´s best way possible.

Not only is the music a Hellhammer clone but he lyrics are either a continuation of Hellhammer songs or just wordsplay on Hellhammer related topics.

To sum it up. If you like Hellhammer (and I know you do), you wont be dissapointed when you check out "Only Death is Real". This is not the real thing but they get damn close..