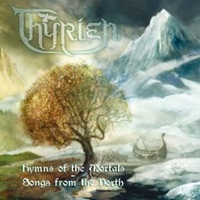 THYRIEN – Hymns of the Mortals

They say you have a lifetime to create a debut album. In the case of Finland’s Thyrien, that statement could be ironic. Originally starting on "Hymns of the Mortals" in 2008, it took until 2014 for this release to finally hit the marketplace due to lineup changes, paperwork issues, and lack of time to devote to the band efforts. But good things come to those who wait, and I believe this five-piece will attract quite a unique following with their blend of death metal, black metal, and folk metal- along with some symphonic elements for greater dynamic effect.

In a scant 43 minutes, these 10 tracks fly by with the cultural/ folk charm you’ve come to know and love from say Ensiferum and Finntroll, along with the heaviness and extreme death/black riffing and vocals that make Wintersun, At The Gates, and Hypocrisy very impressive. Guitarist Oskari Koivisto has a dual growl/ scream approach that resonates equally with those who love a low pitch roar as much as the black metal wailing in the upper regions- some of his best work occurring in the highly harmonic "My Victory My Defeat" and slightly symphonic speed burner "Vengeance Through My Soul". The folk nuances can appear very early in a song sometimes, check out "Deathwish" for this mid-tempo marching aspect that will get people clapping and dancing in the aisles if Thyrien chose to air this out to live audiences.

"Natures Rage" is another favorite of mine, with Oskari and fellow guitarist Valtteri Martikainen laying down a series of aggressive chord choices and quick stop/ start transitions that just bulldoze in a way that hasn’t been heard since the masterful "Slaughter of the Soul" / At The Gates days. Somehow I worried that the various sub-genres coming together as one would present cranium confusion- but Thyrien streamline the process and know that their main style still remains in the death/black genres.

Quite a killer debut album, "Hymns of the Mortals" is another Scandinavian metal highlight from a territory loaded with creativity and exemplary execution.