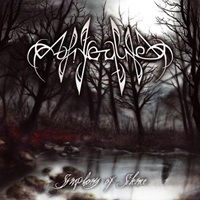 Female fronted symphonic metal is the dish du jour today with this Italian five-piece. Starting as a cover band in 2009, they eventually wrote and recorded originals, to the point of releasing a demo in 2010- and now unleashing their debut album. At 12 tracks and a little over an hour of music, Afterlife could overstay their welcome to a newcomer. I hear strains of Nightwish and Epica in the 8 minute "We Are Our Own Evil" just as much as the flowery keyboard parts that flood the soundscape of "Our Seasons". There is also a heavier guitar sound that comes from the progressive death school a la Opeth on most of this material- too bad the overall production has a tiny quality that makes the final product a little weaker than it should be sonically.

Where symphonic acts sometimes lose me is the prolonged introductions or instrumental sections of certain tracks. I realize they are trying to set things up thematically, but too much slow-moving keyboard swirls like the one in ""Winter Might Catch Me" and you’ll find this reviewer nodding off to sleep land. Afterlife works better getting to the meat of an arrangement instantly – as in "The Time beyond the Fog" – with beautiful contrast as vocalist Anna Giusto glides with semi-gothic, semi-angelic grace and charm.

In the end "Symphony Of Silence" is average at best and not really adding much to differentiate itself from the symphonic metal pack.