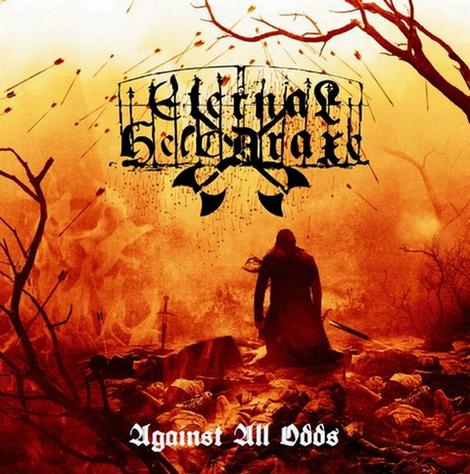 ETERNAL HELCARAXE – Against All Odds

Eternal Helcaraxe as a very interesting and underrated black/pagan metal band hailing from Ireland. I`ve followed them ever since their first demo, "Palest Kingdom", and they seem to develop and get better by each release of theirs. "Against All Odds" is their first proper full-length album and a great one at that.

The opening song on "Against All Odds", the one entitled "Claim Your Place with the Gods", is such a great slab of melodic, melancholic, and haunting music. Those calm guitars and melodies that make up the track give me the chills. Following that one the band kicks things off with an epic and aggressive song in the shape of "One Still Stands Here" and from then on there`s no turning back. The album is filled to the brim with great and catchy melodies, aggressive drums, well-used keyboards that supplement the music nicely, mythological lyrics, and epic moods. There`s a sense of longing and sadness present in some of the songs, which makes for quite the moving listen if one is in the right mood to absorb this kind of music. The vocals could be a bit more dynamic and varied in places, but they`re not bad by any stretch of the imagination. Clearly the band has become better at creating more variation within each song and throwing in a few surprising or unsuspected ideas here and there. A song such as "We Assist Death" simply has it all and contains so many cool details.

Instead of handing out some track-by-track rundown I`ve decided to cut this rather short and simply tell you that pretty much every song on the disc is either good or very good and that we`re dealing with a very solid and well-produced album that I urge you to check out. The artwork and lyrics also rule! And check out the "To Whatever End" EP while you`re at it.