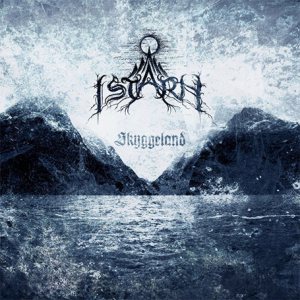 Istårn is a relatively new Norwegian black metal band comprised of three guys. I can’t tell if there’s a fourth member involved now, as stated on Metal Archives, but the booklet only shows three guys, so I’m sticking to that. They got together back in 2010 and hail from Bergen. "Skyggeland" is, as far as I can tell, the band’s second output to date. The aforementioned album contains 9 songs of which the opening track is a short, eerie ambient piece.

To be perfectly honest with you, I didn’t expect much at first due to the bandname, the song titles, and the actual album title. It all sounded and looked a bit cliched and stereotypical to me, and what Istårn does has been done lots of times before, but luckily I was proven wrong in terms of the quality of the music. I’m actually quite surprised at how good some of the songs on "Skyggeland" are, especially when considering just how young these guys are and that the band hasn’t existed for long. They can fucking play alright!

It’s pretty obvious that there’s a lot of thought behind most of the songs on the album in the sense that they’re quite varied, dynamic, well-arranged, and somewhat unpredictable in places. It doesn’t sound like a bunch of teenagers getting together and simply putting some retarded riffs together and calling it a song. Far from it. The melodies are catchy and strong, the vocals are sufficiently varied and match the different moods inherent in the songs rather well, the mellow parts are atmospheric, and, like I said earlier on, these guys seem to know their instruments better than most young bands out there.

The production also appeals to me. It sounds pretty organic to my ears and all the instruments are clearly audible. Those rumbling bass lines that crop up here and there are pretty cool and compliment the guitars well. There’s a sense of the epic and the melancholic to their music, and some of the riffs and melodies are pretty damn beautiful in my humble opinion. Check out "Valkyriens Sang" if you think I’m lying. From time to time Istårn reminds me a little of Gorgoroth and Taake, but nods to thrash and doom metal are also present.

It’s not often that I’ve come across such a strong self-released album as this by group that is fairly young. There’s a lot of potential here and if these guys develop and refine their sound even more they could very well turn into a powerful, well-oiled black metal machine. "Skyggeland" isn’t original or innovative, but it’s a very good album nonetheless. If underground black metal is your cup of urine then by all means support Istårn. They deserve it.