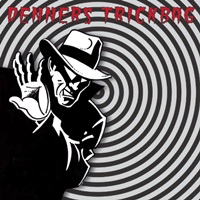 Legendary guitarist Michael Denner is probably best known through the years for his contribution to Mercyful Fate and King Diamond in the 1980’s and 1990’s. This latest band Denners Trickbag formed in the summer of 2012, and Michael felt it was important to surround himself with Danish musicians not involved in his previous metal circles. This self-titled debut is a 10 song throwback to his early heavy album collection, a mix of hard rock with progressive and haunting elements.

You can feel the smoke firing off the amplifiers and stripped down guitar action that just builds and builds- something that would excite hard rock fans in say 1974 before record companies tried to dictate commercial enterprises. Vocalist Lars Berthelsen has a soulful, expressive voice, equal parts Robert Plant and Paul Rodgers with a slightly twisted Ian Anderson nature at times. Drummer Kim Hageman breaks out the cowbell during "Never In My Life", a number that gives my ears a Montrose meets Blue Oyster Cult recall, with Michael Denner and Peter Domptorp Hansen teaming up for a series of blues-based riff hooks. The 9 minute epic "Dancing Madly Backwards-Armworth-Myopic Void" is another jam-oriented builder with slide guitar parts, military percussion, and this openness that hasn’t been heard since the heydays of Mountain or Captain Beyond. "Foyers of Fun" is an early favorite- an addictive riff coupled with Lars’ light hearted word dance makes this a solid winner to get your toes tapping- especially as Kim places all the right accents with loving 70’s groove in mind.

Yes retro-rock/ hard rock is all the rage as Vanderbuyst, Orchid, Witchcraft, Ghost B.C., and Rival Sons gain market share and critical acclaim. Denners Trickbag is a quintet that may play in that similar breeding ground, yet aren’t producing music that will be fading fast as the trend goes away. This is the real deal, and I hope the band continues to explore their roots with future recordings.