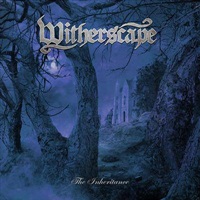 Dan Swano earns the right to be as prolific (or thoughtful) as he desires. The depth of his collective work as musician, songwriter, and producer in the metal community should put him in a hall of fame if we had one to place him in. Edge of Sanity in the 1990’s put his talent on the international map, and ever since I’ve paid attention to his work from the progressive rock of Odyssey, to the avant-garde death metal of Pan.Thy.Monium and the melodic metal of Nightingale, and that’s only the short list.

Witherscape is a conceptual project started with Dan and fellow multi-instrumentalist Ragnar Widerberg- the former handling vocals, drums, and keyboards while the latter tackles the guitars, bass, and lead breaks. "The Inheritance" overall encapsulates a large number of dynamic sounds, melodic in its outlook but also combining some of his Edge of Sanity heaviness with elements of Amorphis, the gothic bliss of Type O Negative, and even the progressive outlook of Opeth. "Dying for the Sun" for instance is a 6:14 arrangement with more introspective guitar work and lighter Marillion meets Styx touches in the deep keyboard play – only to turn on a dime with fierce death vocals and aggressive, thick electric riffs that create a haunting portrait sonically. "Mother of Our Soul" contains a heavier cultural atmosphere- the second riff being much more traditional metal in a Priest/ Maiden way, and Dan alternating between his confident clean melodies and the gruff death delivery that we love from his Edge of Sanity heydays.

Ragnar’s lead breaks are spirited without being pure shred exercises- he’s obviously studied the work of Randy Rhoads, Jeff Waters, and the Scandinavian brigade as he knows when to be quieter and reflective as well as turn up the aggression and speed depending on the needs of the individual song. And lyrically the concept story (taking place in Sweden during the late 1800’s) delves into a wealthy man inheritance of a family estate and the mysteries surrounding this land- handled brilliantly by November’s Doom vocalist Paul Kuhr.

My favorites change the more I listen to "The Inheritance"- "Astrid Falls" contains a lot of older 70’s spirit a la Kansas and Styx along with Amorphis, while "The Math of the Myth" is more of a pure ‘metal’ affair that will appeal to those into traditional and melodic metal sounds. Overall, Witherscape is a stunning debut from veteran musicians who still breathe vitality into this genre.