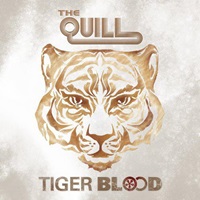 Heavy rock, stoner rock, it’s all still rock ‘n roll to me (and Billy Joel who had a number one hit with the song). Sweden’s The Quill plug along with their seventh album "Tiger Blood" – and I’m uncertain whether Charlie Sheen’s drug induced binges on his infamous promo tour following his firing from his television show "2 and a Half Men" influenced this title or if the quartet banded about this fiery title all on their own. No matter- their last album in 2011 "Full Circle" had a lot of that older Queens of the Stone Age meets Corrosion Of Conformity (circa "Deliverance") / Black Sabbath-like groove that hit my ears squarely with the right sonic boom. Could lightning strike twice?

Immediately the snare snap and cymbal skills of drummer Jolle Atlagic set "Freak Parade" going in the proper direction, siphoning Stone Temple Pilots and the Foo Fighters riff and melody-wise if thrown through a bluesy hard rock blender. "Go Crazy" has a little bit of Chickenfoot meets Aerosmith feel in terms of the commercial vocal parts from Magz Arnar as well as the fairly straightforward shuffle chords. The album continues to bounce back and forth between those mid-tempo anthems with an older 70’s appeal like "Death Valley" and the Led Zeppelin-esque quieter ballad "Land of Gold and Honey" and the heavier, heads down material such as "Getaway" and "Darkest Moon" where guitarist Christian Carlsson spits out killer riffs to keep up with the stoner/heavy grooves.

I believe Mustasch is the best Swedish band in this stoner hard rock genre, but The Quill would be a close second based on their discography through the years. "Tiger Blood" has enough hooks and power to keep audiences satisfied as they plot their next touring escapade.