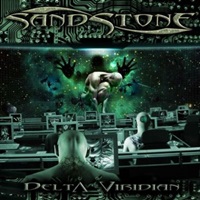 The melodic progressive metal band Sandstone returns for their fourth full length "Delta Viridian". This Northern Ireland quintet has been quite impressive with their style, making a major leap in terms of songwriting and uniqueness with their last album in 2011 "Cultural Dissonance". So with great anticipation I press play on their new 12 track offering, to see if the band can continue producing interesting arrangements with spirited musical passages while also retaining the necessary hooks and melodies to capture ardent listeners.

As a five-piece, Sandstone may not seem at first to be the most technically profound group you’ve heard in the genre. A lot of their intricacy lies within the way they set up their riff changes and allow subtle time changes in the rhythms and tempos to engage your brain and ears. "King of Cipher" for instance contains great closing guitar harmonies as well as drum tempo maneuvers from Decky Donohue that go from metal to progressive rock and back while the background keyboards add extra tension to the rising and falling chord movements. "Red Mist" is a double bass energy monster right from the get go, offering an outer world atmosphere in some of its transitions and killer guitar lines throughout from Stevie Mclaughlin and Dee Kivlehan as the song twists with Poverty’s No Crime meets British metal appeal.

Towards the end of the album, the quieter meets neo-classical side comes into the forefront, check out "Fortress" and the 9:13 closing epic "Vitruvian Man" for the progressive instincts that come through in bursts, along with an impeccable sense of knowing when to hit the right guitar harmony, or background keyboard stroke, or killer high pitch melody. Another asset for Sandstone is the higher range of vocalist Sean McBay- he has an atypical voice that is in a caliber like Andrew ‘Mac’ McDermott during his Threshold years, not as metal or fierce but still capably delivering the word pictures to the band’s musical outlook.

"Delta Viridian" will find favor with those who love melodic progressive metal, and artists such as Threshold, Saga, or Poverty’s No Crime- along with a sense of traditional/ power guitar harmonies when called for.