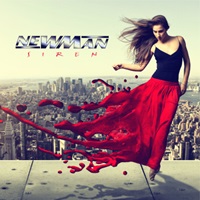 The tenth studio album from UK melodic rock veterans Newman continues the trend of shimmer vocal harmonies and pirate-sized musical hooks in these 12 tracks. Vocalist/ guitarist Steve Newman crafts songs like "Feel Her Again" and "Had Enough" with this close to arena/ AOR style chord progressions and easy on the ear melodies that can capture your attention instantly.

Acts like The Outfield, Richard Marx, and FM come to mind when I continually play this material- the rhythms are straightforward, as guitarists Steve Newman and Shaun Bessant intertwine with that chemistry you can’t manufacture, and the tempos fluctuate between bluesy-oriented hard rock grooves and straight forward melodic rock ready made for the radio or live stage. "Another Bitch of a Night" has this slinky, Whitesnake come hither feel during the verses along with a conventional AOR chorus. Even when keyboardist Paul Boyle starts off with these ethereal sounds on "Some Kind of Wonderful", once the guitars kick into gear he falls into line to the tempo and spirit of a heads down rocker.

Newman even digs back into the 1980’s American hard rock sound with the Dokken meets Giant-like ballad "When It Comes to Love" (although the background vocals can be like latter 80’s Chicago). Not everything hits the target (the close to 7 minute "Crossfire" drags a bit due to all the news soundtrack elements during the mid-section), but overall the band display acute sensibilities to the melodic rock/ hard rock genres, and you feel the genuine respect and admiration the players have for the songwriting at hand.

"Heaven Knows" from 2006 used to be my favorite Newman disc- but "Siren" tops it even after a month sitting with this record. All who love melodic rock, AOR, and just hook-oriented songwriting in general need at least one or two Newman records in their soundtrack of life.