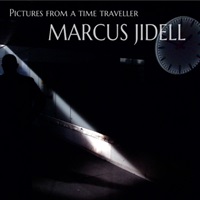 Stepping away from his regular gig as one of the axe masters in Sweden’s Evergrey, Marcus Jidell flexes his progressive, instrumental muscles on this 7 song, 33 minute plus effort. He at heart can display the fine arpeggio sweeps and picking skills of virtuoso masters like Malmsteen, Blackmore, and others of the neo-classical penchant- but fortunately for the listeners he wraps this around some tender restraint with thoughtful riffs and songwriting intelligence.

Supplementing the sound with fellow Evergrey bassist Johan Niemann and drummer Hannes Van Dahl, Royal Hunt keyboardist Andre Andersen, and ex-Malmsteen cello player Svante Henrysson among others- tracks like "Space Dog" and "Arctica" for the majority of their arrangements may have familiar passages that guitar-oriented instrumentalists prefer. On the flip side you’ll get "Tesla World System" that starts off with remarkable restraint and builds into this 70’s progressive rock/ fusion like number with old organ/ electric guitar tradeoff segments as well as the outer world "El-Amarna Ruins Of Akhetaton (Mstrd)" with this slower, epic drum tempo and more open ended, spacey Satriani-like breaks as well Svante’s majestic cello work during the song’s concluding segments.

"Wedding Song" is the softest track on "Pictures from a Time Traveller", showcasing Marcus’ shredding skills with a cleaner, bluesy texture- and one that hopefully he expands upon on future albums. From initial demos in 2005 to final product this year, Marcus Jidell has delivered in a realm that normally appeals to only the most technically minded in the genre- and I think this is an instrumental album all metal heads need to hear.

WHITESNAKE – Made in Britain/The World Record