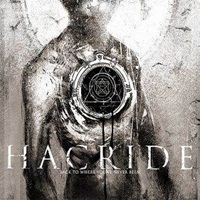 HACRIDE – Back To Where You’ve Never Been

A time of transition for this French progressive extreme metal act, as Hacride on album number four "Back to Where You’ve Never Been" gain new label support and break in two new members with drummer Florent Marcadet and vocalist Luiss Roux. This is my first chance to take in the quartet, and their blend of modern dynamics (lower tuned bass, sustained screams, tight ‘groove’ styled riffing) with clear metal attack and progressive/ choppy instrumental sections gives songs like "Strive Ever to More" and the semi-electronic/ gothic "Edification of the Fall" a vital mechanized strength.

Luiss alters between a psychedelic clean voice and a maniacal death/core beast- sure to please the Hacride faithful and make elders run from the speakers with ears bleeding. The two interlude tracks "Synesthesia" and "To Numb the Pain" give the listener a brief ambiance breather, but it’s understandable with a 4 year break between efforts that this could be considered filler with only 6 regular full length songs on display. Acts like Scarve, Neurosis, and some of the off-time percussion elements that made Tool and Meshuggah so infamous would be the best way to describe Hacride.

"Back to Where You’ve Never Been" isn’t bad per se- it’s just an album that has to strike me in the right mood to engage in- which probably makes me outside of Hacride’s target audience- a youthful one who need to release daily pent up stress in a healthy manner. The slower "Requiem For a Lullaby" with Luiss’ Alice In Chains-ish melody patterns and the darker, rolling electric/clean riff tradeoffs appear to be a sign of good things to come with sonic exploration.