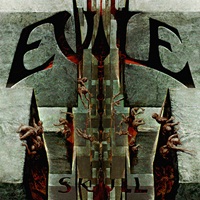 Leaders of the new UK thrash breed, Evile return for their fourth full length album "Skull"- not content to streamline their riff assault in the hopes of major commercial breakthroughs. And why should they? Lead guitarist Ol Drake has an open invitation to perform with Germany thrash veterans Destruction on their albums (and live if necessary), and the band themselves maintain a heavy touring schedule with acts like Exodus, Kreator, Megadeth and Overkill through the years in mainland Europe and North America.

So true to their new album every two year schedule, the 9 songs on "Skull" represent a quartet no longer considered inexperienced- they showcase a mature confidence and pure understanding of what thrash/ speed metal fanatics desire in their music. As brothers Matt and Ol form an electric jackhammer sound that drills down with a chunkiness and frantic groove, one that contains spices of classic Wargasm, Metallica, Xentrix, and Annihilator – their work in "The Naked Sun" and "Underworld" sure to strain thousands of necks on every upcoming tour date. "Head of the Demon" has that mid-tempo tribal swing to it with an eerie/ acoustic bridge that Metallica perfected during their "Master of Puppets" days.

When Evile decide to take the mood into slower, darker pastures- such as "Tomb"- the rhythm section of bassist Joel Graham and drummer Ben Carter prove they aren’t all about pure speed and adrenaline output, that they understand where to put the right accents on the Drakes multi layered acoustic/ electric interaction throughout this epic 7:32 arrangement. The four distinct sections to this track alone are worth the price of admission and illustrate Evile’s ability to move beyond normal thrash and bash material into songs that can make an act legendary.

You also feel Matt’s Hetfield-ish power sneer and screams during songs like the gallop heavy "Outsider" and solid anthem closer "New Truths Old Lies" featuring some of the best lead work from Ol on the album as well as great transitions in tempo riff to riff. Crisp in your face production, solid performances all around- "Skull" should be on the essential buy list to any thrash fan- and could push Evile higher in the ranks of the new generation for popularity.