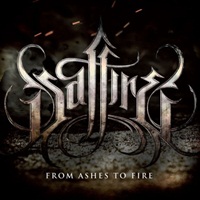 SAFFIRE – From Ashes To Fire

Swedish melodic hard rock band Saffire has been plugging away at their sound since 2005, recording a couple of demos and dealing with the normal lineup changes that often take place in getting a band off the ground. Their debut album "From Ashes to Fire" is a testament to 70’s and 80’s hard rock- engaging the listener with 13 songs of strong, bluesy-oriented vocals, a guitar hero who can riff and solo with the best of them, a keyboardist right out of the Rainbow mold, and a rhythm section that would make any Van Halen/ Black Sabbath fan very proud to hear.

Saffire know that the key to keeping a hard rock follower’s interest lies in a mix of arrangements and differentiated tempos. You’ll get the classic anthem cuts such as "Kingdom of the Blind" and "Say Goodbye", the dramatic power ballad for "What If" that has dramatic piano/ keyboard movements that recall Whitesnake meets Masterplan and the thunderous up tempo material with "Magnolia" and "A Symphony Unheard" that fits right in with the latest Firewind or Pink Cream 69 efforts. Tobias Jansson as a singer will conjure up thoughts of Apollo (Spiritual Beggars, ex-Firewind), and musically the band can also deal some exotic elements such as the Middle Eastern atmosphere within "Paralyzed" where guitarist Victor Olsson delivers some slower, almost doom-oriented slithering chords while melding together the best of Blackmore and Iommi.

My only qualm about newer bands is their insistence on overloading material for their first album- rare is the day when an artist warrants more than 50 minutes of time and focused attention, it’s better to leave them wanting more than exhausted. "From Ashes to Fire" would have been a killer 11 song album, instead at 13 songs and 67 minutes the fatigue factor comes up.

Who says real bluesy oriented melodic hard rock is dead and buried? Not Saffire- and not this album. Pick it up as this newcomer has plenty of talent and potential.