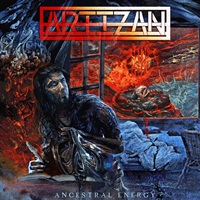 They say you have a lifetime in a band’s career to refine and retool your debut album- and then half that time span (or shorter) to get a follow up out. Jacksonville, Florida traditional, melodic power metal band Artizan impressed this journalist right out of the gate with their debut album "Curse of the Artizan"- a great combination of classic high powered vocals of Tate/Arch caliber and the musical prowess to equally engage the listener with propulsive rhythms, classic riffing and spirited melodies and hooks coming at you in all directions.

Now 2 years later, "Ancestral Energy" has a tough task for Artizan to accomplish- prove that the band hasn’t run out of original ideas as well as executing them in an entertaining manner. And after multiple passes with the album’s 7 tracks from first note to last, the quartet illustrate that they’ve come to build their following for the long haul, like many of their early influences. Producer Jim Morris at Morrisound Studios is behind the boards for these sessions, and I think the vast knowledge and skill set helps Artizan achieve an even stronger, crisper sound.

The opening track "I Am the Storm" starts with slower guitar harmonics and quickly builds off the Ty Tammeus open ended drum fills and solid Queensryche-like tempo and Tom Braden’s intuitive vocal mastery- only to transition with bassist Jon Jennings progressive leanings. The follow up "The Raven Queen" is more commercial leaning, with that semi-Iron Maiden like gallop to keep your body moving along. Where Artizan excel is their ability to take you on a journey with each song- understanding the need for dynamics, ascending riffing and melodies, and exciting transitions without being too overcomplicated.

The two epic songs on this album "Deep Ocean Dreams" and the 10;34 title track (with guest vocals from Matt Barlow of Iced Earth/ Ashes of Ares notoriety) really hit home with my heart- taking in aspects of classic Queensryche, Iron Maiden, Heir Apparent, and others in that melodic power mold just with a slightly more time signature manipulation comfort. The band attack with passion to the highest degree- I want to air drum with the crash cymbals, air guitar with the lead breaks and riff hooks, and even attempt to mirror Tom’s multi-octave range (but fail miserably… he is a top five vocalist for the current melodic metal generation to study).

In a just world, "Ancestral Energy" would be hailed as a worthy successor to "Rage For Order" or "Powerslave"- the musicianship, songwriting, performances are that good. Do not let Artizan remain unknown- if you love traditional, melodic power metal, this is essential!