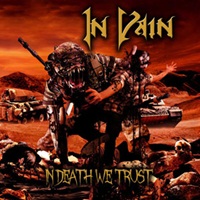 IN VAIN – In Death We Trust

A major struggle in today’s metal scene is establishing your own name. So many bands these days take inspiration from their favorite band and maybe nick a song title or key phrase here and there to develop their band moniker. In the case of Spain’s In Vain, I’ve seen at least 6 bands using that name- including an incredible progressive death/black metal oriented band from Norway who established themselves a year before this power metal quintet. Basing this solely on their music, the second album "In Death We Trust" is a decent effort for those who miss 80’s level Iron Maiden with the power and speed flourishes that Running Wild and Helloween have made famous.

Guitarist Daniel Cordon handles the vocals and establishes a competent mid-range (although a little weaker in his upper screams/ shouts) while keyboardist Francisco Quintanilla works from more of a classic Dio/ Rainbow template rather than running up  and down the neo-classical scales. Songs like "War Machine" and "Ghost Galley" contain all the right speed riffing, galloping bass parts, and thunderous double bass oriented percussion that the German power movement brought to international glory in the latter half of the 1980’s. "Sun Hunters" is a more straightforward, hard rock oriented number, something I could hear Skid Row doing during their "Slave to the Grind" era, I love those trailing guitar notes at the end of the verse riffs from Cordon and fellow axe-slinger Daniel B. Martin, while the follow up "Through Hell To Paradise" is something I could hear out of the Axel Rudi Pell camp, a 6 minute epic oriented arrangement with slower, marching strains and cultural hooks.

Overall, this is a decent traditional/ power metal offering from In Vain, "In Death We Trust" would be a good pick up for those who miss a mix of the Dio-led Rainbow years with Running Wild and Helloween also in their sights.