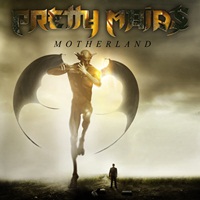 Veterans of the melodic metal scene, Denmark’s Pretty Maids appear to be on another upswing in popularity. Performing at some of the best festivals across the globe- Wacken, Bang Your Head, cruises, ProgPower USA- the band appear razor sharp in terms of songwriting prowess and performance. "Motherland" is their latest studio platter, the follow up to the impressive "Pandemonium" outing in 2010- sticking with producer Jacob Hansen (Volbeat, Amaranthe) and continuing their stock in trade masterfulness when it comes to this genre.

Keyboardist Morten Sandager unfurls his tricks of tones and swirling chord enhancement right out of the gate with "Mother of All Lies"- a mid-tempo anthem featuring a cool rhythmic groove and addictive vocal harmonies. Other instant highlights include "The Iceman" with its modern counterpoint keyboard elements against the otherwise heavy guitar riff and the sure fire drum/guitar hook interplay for "Who What Where When Why" that I can see charging up many an audience if performed live on tour. Vocalist Ronnie Atkins hasn’t lost any of his front man spunk and fun spirit, "Hooligan" a fine example of his occasional forays into metal screams as the chorus mirrors the better "Hysteria"/ Def Leppard harmony days. And we also get a power ballad with an emphasis on thorough build ups and dramatic dynamics with "Infinity"- guitarist Ken Hammer proving you don’t necessarily need to carry on with a flutter of shredding to capture emotional contrast.

Ultimately, Pretty Maids remember that their fans enjoy a mixture of ballads, mid-tempo offerings and the occasional energetic number like the blistering title cut to get all their aural desires met. In a just world, the old timers and the new breed of AOR-oriented melodic metal fans would embrace "Motherland" with as much passion, fervor, and sales muscle as the "Red Hot and Heavy" or "Future World" album periods of their career.