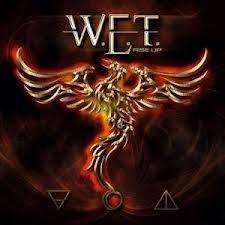 22nd of February the Swedish band W.E.T released their second album since 2009, titling it "Rise Up".  Their sound and genre is described as modern melodic hard rock, however after listening to the three first tracks on the album and thinking it was all just one never ending song, I beg to differ. Calling it pop rock would be wrong, because there`s hardly anything catchy other than the intro on the track " Broken Wings ", and as for melodic, I feel it`s stretching it. Vocalist Jeff Scott Soto ( The fictional band "Steel Dragon" from the movie "Rock Star", Yngwie J. Malmsteen’s "Rising Force", Talisman and others) has a vocal range and sound most lead singers would die for, but I`m sad it`s "caged" and limited by what I would call a poor production. The mix does not allow for the vocal to play around in what could have sounded like really cool riff`s but it all sounds so digital, VST plug-in and clean. I am sure this is a band that can keep a crowd warm from a live stage performance, but as for listening to the album for the sake of listening, I would say it fails, which is too bad considering the musicians who originally formed W.E.T individually do a good performance.

This is not going to be a classic, rather another filler in the members own project`s discography and releases. But, if I had a chance to catch a live performance I`d probably go and give it one more chance.