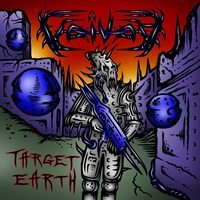 We should all feel fortunate for this Canadian experimental, futuristic, adventurous thrash band and their existence. Always challenging the conventions of the genre, expanding parameters with off kilter progressive chord structures, haunting meets forceful vocal melodies and this overriding sense that with each passing exposure to their material, your brain and body head with Voivod into territories never expected or seen before. Long time followers waited patiently when the last archived riffs from deceased guitarist Piggy came together for 2009’s "Infini" album- concerned if we would ever witness another original studio platter, or if the band would relegate themselves to the live festival circuit.

Well wonder no more, ladies and gentleman: "Target Earth" with latest guitarist Daniel ‘Chewy’ Mongrain in the fold since 2008 is a more than capable creative force to keep the band on their collective mission for the progressive, avant-garde metal cause. He weaves in 70’s Rush influences on "Warchaic" while being exotic with his skillful acoustic instrumentation on the opening strains of the otherwise stair step dissident chord building "Empathy For the Enemy" (check out the twisted minor bends at 3:34-4:10). Drummer Away plays with the vigor of a man half his age- throwing down difficult time signatures and tempo changes without losing any sense of groove. Many drummers wish they could be technical but then lose the purpose of distinctive, instinctual performances from song to song- check out "Mechanical Mind" and the slow churning "Artefact" for two of his classic takes that anyone into progressive music needs to hear.

Snake as a vocalist is as slithery as his namesake. Occasionally keeping his thoughts minimal and rhythmic, at other times bursting at the seams with propulsive energy, there’s no one quite like him in the metal business. Couple the band’s performance with another Away front cover that keeps Voivod far from the norm, "Target Earth" will be an early front runner in my end of the year top list. Fifty playbacks and counting, I find comfort in their science fiction/ technology themes, and the out of the box songwriting gives my ears something fresh with every repeated exposure.

Many are saying this should have been the natural follow up to "Nothingface". I’ll leave that up to debate- what I will say is Voivod prove there’s still plenty left for them to say in metal for years to come.