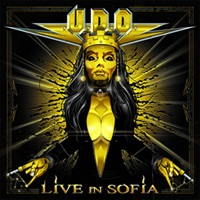 The third double live album for U.D.O. in their 25 year career assures the listeners a versatile run through of both their studio catalog and the classic Accept tracks that make audiences scream, clap, and chant for. "Live in Sofia" contains 13 U.D.O. tracks, 8 Accept numbers plus guitar and drum spotlights for a 2 hour plus entertainment excursion. In support of the "Rev-Raptor" album, we get 3 tracks including the single "Leatherhead", the opening title cut and the ballad "I Give As Good As I Get". Other mandatory numbers from the vast catalog that receive rapturous response include "Heart of Gold" from "Faceless World" and "Break the Rules" off "Mean Machine".

What I enjoy most about Udo’s Accept selections is the fact that he doesn’t always include the standards- he knows that the fans who’ve been with him for decades want a few different selections to change things up from tour to tour. So while "Balls to the Wall" and "Metal Heart" are mandatory, "I’m a Rebel" and "Screaming for a Love Bite" may not necessarily be so- and welcomed whole heartedly from this enthusiastic crowd. The prolonged guitar solo/ instrumental segment "Kokopelli" could have been something best suited at 5 minutes versus 11 minutes plus- as I’m sure the fans would have preferred another original song or two for their money.

Udo Dirkschneider possesses one of the most unique metal voices, resonating loud and clear- it’s unmistakable and hasn’t lost its grace or feel through the years. The band mates bleed for the traditional metal template- knowing when to extend certain segments of songs to encourage longer audience back and forth participation sections. We are fortunate in 2012 to have both Accept and U.D.O. not only playing at a professional level in a live situation, but still releasing stellar studio material that doesn’t stain their earlier works.

Younger bands should study this work and emulate the professional attitude and attention to songwriting quality U.D.O. deliver year in and out.