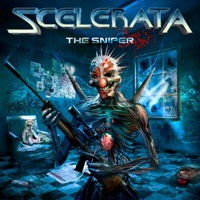 Brazilian power metal act Scelerata step up their game with this third studio album "The Sniper" – taking the time to trek to Germany with producer Charlie Bauerfeind at Blind Guardian’s Twilight Hall Studios. Four years beyond their last studio album "Skeletons Domination", it’s not like the quintet has been idling their time away. Touring 3 times in their native Brazil with Paul Di’Anno as his backing band from 2009-11, they also gained the services of a new vocalist in Fabio Juan who got his indoctrination while on the road for said shows. So the seasoning pays big dividends, as the 11 songs on this 53 minute record are razor sharp, crisp and full of fury, melody, and high energy in the top tier way.

Guitarists Renato Osorio and Magnus Wichmann comfortably wield their axes with rhythm and lead work that incorporates neo-classical, progressive, and twin harmonies with all the best tools of the metal trade from a historical/ mentor perspective. "Breaking the Chains" and "Rising Sun" containing a lot of fleet finger taps and shredding moments that evoke the devil horn salute. Light use of keyboards comes into play during "Drowned in Madness", a mid-tempo offering in line with Andre Matos era Angra as Fabio’s falsetto work recalls his best "Angels Cry" days. For people who love the high energy, positive riffing with blitzkrieg Francis Cassol drum parts, " ‘Til the Day We Die" will be your new song to champion, I especially love the transitional tempo change that takes on a victory march motif. And if that’s not enough, we gain two special vocalist guest appearances from Helloween’s Andi Deris and the aforementioned Paul Di’Anno- the latter working out with the more aggressive atmosphere within "In My Blood".

Those who miss old Edguy and older Angra, along with guitar spots that rival fellow Brazilian act Hibria, need to take in "The Sniper". The Far Eastern and South American power metal brethren live for this kind of music, and Scelerata could be their new flagship band to spread their wings to. Not the most original style- but with execution this great, the quality rises in the end.