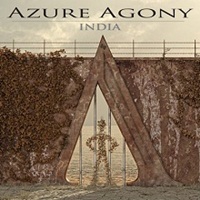 Azure Agony is quite a name for an Italian progressive metal act that originally started as an instrumental unit, so much so that they released their debut album "Beyond Belief" without a singer because they couldn’t find one that would rise to the level of the musical challenge on display. In 2011 Federico Ahrens took over that missing slot and this second album "India" represents their first vocal collaboration- an 8 track concept record based on personal introspection and research.

Right from the start, drummer Carlo Simeoni stands out with his out of the box percussion style- a mix of jazz, progressive and metal leanings, he balances obvious off time ability with the right nuance of in the pocket groove. Stewart Copland, Mark Zonder, and Terry Bozzio are three drummers that come to mind when I hear Carlo’s fluid free flowing work on "Twin Babel" and "My Last Time on Earth". Guitarist Gabriele Pala doesn’t feel restricted to dazzle with lightning fast aggressive shred technique- as he proves that it’s okay to often be subtle with texture and openness on the left field "Libra’s Fall" which combines clean, echoing verse parts with this almost twisted Devin Townsend meets Middle Eastern bending maneuvers.

Federico has a sterling sharp voice tailor made for progressive metal- more in line with others in the scene like Terence Holler from Eldritch or Michael Tangermann from Superior and able to hit all levels from low to high, especially evident in the 10 minute plus epic title cut. As a group, Azure Agony have a lot of elements that should appeal to fans of Sieges Even and OSI- where the instrumental chemistry gels collectively and isn’t in a free for all competition for individual notoriety. My favorites change depending on the week- but I’m currently gravitating to the semi-tribal hipness meets somber tranquility of "A Man That No Longer Is" that features killer bottom end bass work from Marco Firman.

"India" better not fall through the cracks, this is too strong of a product to let Azure Agony go unnoticed.