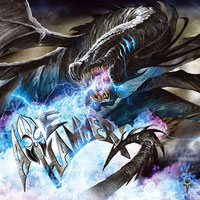 Originally developing their sound through a couple of demo releases in the early 80’s, California metal act Axehammer laid dormant for many years- releasing only an EP in 1998 called "Lord of the Realm" before Sentinel Steel Records would put out their debut album "Windrider" in 2005. Lineup changes take place again before this second album "Marching On" appears- vocalist Kleber Mandrake and New Eden guitarist Horacio Colmenares come in (Horacio handling the bass duties for Axehammer) along with veteran members Jerry Watt on guitar and Joe Aghassi on drums- but if you think they are changing their traditional metal template, you would be so wrong.

With production assistance from Bill Metoyer, it’s little wonder that Axehammer harkens back to the early days of US independent metal. Artists like Helstar, Jag Panzer, Omen, and Liege Lord come to mind with these galloping rhythms, soaring high pitch vocals, lyrical odes to dragons, demons, and steel and thunderous tempos that will make you bang your head incessantly as if it’s 1983-1986 again. Some of the riffs do have a familiarity such as the opening of "Fire Away" which could be a relative of "Two Minutes To Midnight" Iron Maiden, but the Rob Halford meets James Rivera vocal melodies from Kleber put this in another class. The opener "Walk Into The Fire" should be an easy crowd pleaser- the Omen-like guitar and bass interplay along with the Joe’s punishing mid-tempo double bass work realign my long-time appeal to the early metal movement.

At 8 songs and 39:12, "Marching On" does not waste any time with superfluous individual instrumental dexterity or needless set ups- it’s all about the songs here folks, and Axehammer mount a fantastic effort here. The youngsters could learn a thing (or ten) about the power, the finesse, and the true ethics of these veterans.

MODERN DAY CITIZEN – From The Shell