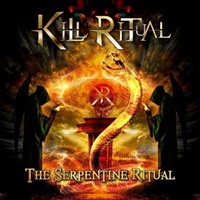 "Torn Down" for instance has a couple of distortion effects during the guitar solo section along with Josh’s Led Zeppelin-ish melody employment that helps set Kill Ritual apart from the normal 1-2-3-4 bash it out mentality. The follow up "Time to Kill" features a number of great point/ counterpoint riffs that build the arrangement to similarities with Flotsam and Jetsam meets Iced Earth- Wayne throwing down this heavy mid-tempo groove while the double bass pumps at blood flowing paces. Steve Rice has great shred skills intertwined with this intuitive harmonic sixth sense, probably a result of performing in front of the greats through the years in the Bay Area.

"Old School Thrasher" is pretty much what you expect from the title, a heads down, thrill seeking thrash number that takes no prisoners and Josh throws down one of his more vicious deliveries. Another stand out to me is "Law of the Land", the main riff something I would picture coming out of the Armored Saint 80’s years and Steve having no fear adding a number of segments where his dive bomb solo work adds a dash of excitement to the proceedings.

Kill Ritual does stand out from the conventional thrash acts- they have more power and traditional influences from bands that may be too light for some listeners (Armored Saint, Flotsam and Jetsam, Metal Church), but do not let this stop you from checking out "The Serpentine Ritual". Potential is present, and that’s key to longevity.