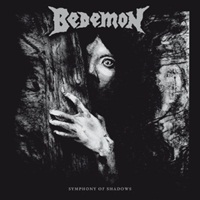 10 years after the untimely death of songwriter, guitarist, and Bedemon visionary Randy Palmer, Finnish label Svart Records releases this 9 song, 60 minute doom metal effort. Still on board is Mike Matthews for bass and lead guitars, Geof O’Keefe on drums and second lead guitar, plus Craig Junghandel on vocals. For those in the know, Bedemon originally started as an offshoot of Pentagram back in 1973- so it shouldn’t be a surprise that the ethics, passion and ability scream from an old school philosophy.

The whispering, repetitive chorus for “Lord Of Desolation” is one that will sink deeply into the cerebellum, and I know a lot of Sabbath and Alice Cooper reference points will be there in the main guitar riffs for songs such as the mysterious “The Plague” and very boogie oriented “Kill You Now”. Expect natural bass sounds (including Mike Matthews taking the first solo on the aforementioned “Kill You Now”), a snare that grabs with analog attention and Craig’s voice is one tailor made for psychedelic doom- trailing notes of despair and conveying the right amount of melancholy throughout. Prepare for a lot of longer instrumental sections/ solo jams, most prevalent in the 10 minute plus “Godless” or subsequent organ enhanced 9:40 follow up “Hopeless”.

Doom when done correctly isn’t a genre that reaches a wide audience- for reasons unknown to this journalist. Maybe it’s more difficult to craft arrangements that are slow building and branch off of simplicity versus attacking your instruments at frantic paces. Randy Palmer will be smiling down upon this record from Bedemon- let’s hope that there are more tracks to unleash in the coming years.