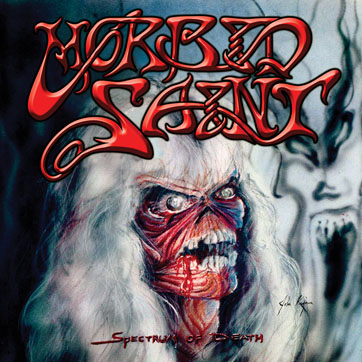 Relapse Records have re-released Morbid Saints (now) classic thrash metal album "Spectrum of Death", originally released back in 1988. This re-release is not the first but this release has two brand new songs recorded by the reunited band just for this version.

Morbid Saint where one of the pioneers of the thrash metal movement back in the early eighties and "Spectrum of Death" have received cult status since then. Their chainsaw guitar riffing and the shrieking vocals where before its time back then and in combination with the furious speed delivered this album raised quite a few eyebrows back then. In just 32 minutes they managed to stack an enormous amount of riffs without it feeling rushed. They where more brutal and faster than their US peers (Slayer, Dark Angel) at the time and with more gore themed lyrics they attracted a big local fan base. Unfortunately they managed just to release this one (again, now) masterpiece before they called it quits and to be honest I was not aware of this before it dumped down in my mailbox. If you are interested in the history of thrash metal this is one album you definitely should check out. And yes, it’s ok to admit you did not listen to it back in 88. This piece of metal stood its test of time and is as crushing today as it was 25 years ago.