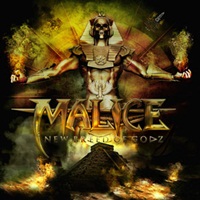 One of the originators in the West Coast traditional metal movement of the 80’s, Malice released two full length albums and did numerous tours in Europe and North America but didn’t make that major breakthrough- a victim of management and record label turmoil. Returning to the scene with 3 of the original members (Jay Reynolds-guitar, Mick Zane- guitar, Mark Behn- bass) plus early Malice drummer Pete Holmes (who also played in Black N’ Blue) and Helstar vocalist James Rivera, “New Breed Of Godz” is a showcase of Malice 2012, consisting of one-third new material and two-thirds re-recordings from the early Atlantic Records years.

Of the new material, the street-level charge emanating from the guitars on the opening title track proves that the quintet have not lost any of their traditional twin fierceness, and Rivera’s soaring multi-octave parts compliment the arrangement. They really live for the potent British metal of Priest and Maiden, yet deliver an American evil tone with their way of phrasing, pacing and harmonic sensibilities. Pete Holmes double bass to snare juggling nature comes up on “Branded”, some of the riffing intertwining classic Randy Rhoads-era Ozzy with Vivian Campbell-led Dio times. “Winds of Death (Angel of Light)” is a 6:19 epic ballad that picks up the tempo a little during the bridge and solo sections, another showcase for James’ low and operatic Halford-like highs. “Slipping Through The Cracks” probably is the closest to old school Malice, another mid-tempo anthem effort in line with something off “License To Kill”.

And as for the 8 older songs- I know there will be many who think it’s unacceptable for any band to re-record the classics. Those early memories- be it through initial songwriting endeavors and the subsequent lack of knowledge in many engineers/ producer to capture a metal sound in the studio- are hard to let go from your ears. Split equally from “In The Beginning” and “License To Kill”, such cuts as “Hellrider” and “Circle Of Fire” stand the test of time, some 26 plus years down the road from the original recordings.

With Joe Floyd (Warrior) handling the production at Silver Cloud Studios, Malice is another veteran group returning with metal vengeance, and let’s hope much like Accept this new chance doesn’t go for naught in terms of audience adulation and live market appeal.