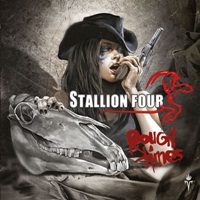 Let’s face facts- when it comes to hard rock and heavy metal, there’s not much more innovation or cross-genre pollination left to tackle. So it shouldn’t surprise you that for all the exploration that occurs, some bands just want to plug in, crank things up, and play. Stallion Four hail from Sweden and live for the template started by AC/DC and Krokus and currently passed on to bands such as Airbourne, 77, or Bullet. In effect, intertwining a bluesy, three chord framework with whiskey-laced vocal work and a rhythm section keeping 4/4 time and laying into the groove as a foundation- that is “Rough Times” in a nutshell, and it’s a potent mix for these 10 tracks.

Bjorn Fors has elements of old Brian Johnson in some of his higher sustained screams- especially noticeable for “Hidden Killer” and “Rough Times”- but I do think a lot of his phrasing and punch is more metalized than conventional, bluesy hard rock singers tend to be. The quick hitting licks and solos from Peter Druck and Markus Berg make them a formidable pair of axe wielders, evoking elements of Slash, the Young brothers and even German power teams on favorites like “Madness” and “Sister Mean”. And you can’t complain about the sound, as Stallion Four do not rely on studio wizardry but the straight sonic tones from their instruments and amplifiers to produce high energy rock ‘n roll.

Bjorn occasionally wears out his welcome if the chorus is slightly too simplified- so he needs to be careful as “Touch Too Hot” weakens its impact with his drawn out inflections. But knowing the growing attention for AC/DC style artists, Stallion Four will be on the list of newcomers to check out based on this debut effort. Strap on your favorite Les Paul or Gibson guitar and rage!