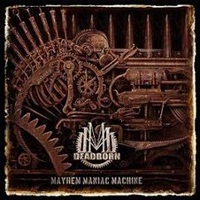 Remember when all the technical death metal bands hailed from North America- especially Florida and Quebec, Canada? Not anymore my friends… in current times even countries more known for their traditional and power scenes are participating in the juggling tempo, dive bomb chord changes and ripping blast beat contests like Greece, Italy, and Germany. Deadborn- hailing from the Teutonic nation- on their second album “Mayhem Maniac Machine” injects a solid base of hooks amidst the band’s instrumental prowess. Songs like “Bionic Abomination” and “Replicants Device” do have sensible rhythms and riff parts that the average listener can latch onto and aren’t mere exercises in wankery.

Comparisons form with the brutality of Gorguts and Morbid Angel against the songwriting touches of Swedish bands such as Grave or Unleashed. Mario Petrovic’s vocals purely spit from the growl perspective, yet this one dimensional approach works very well on the faster material such as “Second Order Cybernetics” and “Insane Motor Cortex”. I would imagine that after even an opening act performance Deadborn need to refuel with large quantities of electrolyte refreshment to offset the energy release from these furious songs.

There is room for “Mayhem Maniac Machine” in all ardent death metal collections. Five years beyond their last record, this is a 35 minute whirlwind that most will return to continuously as it just beats at the heart of why I got into this style in the first place- passion, commitment and intensity of the highest order. Proof that technical death metal can still maintain a sense of clarity, Deadborn impress.