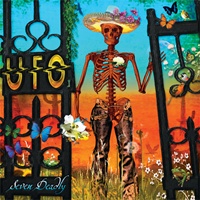 This UK blues-based hard rock act still have plenty of writing intent left in their minds – even sans one of the best guitarists in the business Michael Schenker. Moving from his mostly instrumental album days into this veteran troop in 2004, Vinnie Moore flashes licks and solos worthy of modest adulation and as such “Seven Deadly” could be one of their best studio efforts since 1995’s “Walk On Water”. This twentieth (how many hard rock bands do you know can put 10 albums out- never mind double that- in their lifespan?) full length contains 10 tracks of deep appreciation when four musicians respect their legendary status and write from their hearts and souls.

Trademarks of this group include their versatility in terms of writing ballads, mid-tempo rockers and the occasional foray into a charging number just to remind people that you don’t have to be 18-24 to bust out some kinetic flurry from time to time- as well as the consummate bluesy vocal presence from Phil Mogg. Dig the open snare hits on the gospel-tinged “The Last Stone Rider”- feel the latter day Beatles meets Zeppelin riffs and patient, comforting melodies on the ballad “Angel Station”- live for the charging Vinnie Moore/ Paul Raymond guitars and keyboards in the up tempo highlight “Wonderland”. Those of you who think Vinnie Moore merely will rip off a series of Yngwie-styled neo-classical solos are sadly mistaken- his work on “Seven Deadly” fits right in with the Schenker or Gary Moore mold, sometime slower and sparse and at other times incendiary and jaw dropping, sure to evoke wild cheers from the crowds as they tour behind this.

I get a similar level of excitement taking in songs like “Steal Yourself” and “Year Of The Gun” that I did when first hearing “Force It” and “Obsession” from the band. “Seven Deadly” doesn’t reinvent the UFO wheel- it merely promises a series of well-crafted, hook-oriented arrangements with proper production and should be mandatory for all hard rock followers from 10 to 100.