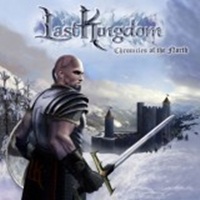 Swedish power metal sextet with a firm grasp of all the conventional elements necessary to appeal to the deepest of fans on their debut album “Chronicles Of The North”. Hammerfall-like guitar runs, flowery keyboards in the Sonata Arctica vein, larger than life choirs for the vocal harmonies and choruses, a drummer reliant on the pumping double bass and tom fills and a variety of mid-tempo to up tempo arrangements sure to evoke all the chants necessary to bring smiles from the stage to audience and back again.

Vocalist Stefan Jacobsen breaks out the banshee highs to excruciating painful levels on “Daylight Retreats” while struggling to hold out certain trailing notes. It’s as if I’m listening to a beginning Italian power metal singer than one from the Scandinavian countries. When the band ratchet up the tempos for “Silver Moon” and “End Of Life”, they traverse Power Quest and Dragonforce stylistically if they were attempting to add a little more traditional flair like Labyrinth or Nocturnal Rites. Last Kingdom’s greatest assets are the guitar duo of Johan Olofsson and David Stockman- both are well versed in doubling up harmonies or letting one take a solo lead while the other lays down a memorable rhythm, their best work coming from the title track as well as the epic 6:59 “Abandoned”.

“Chronicles Of The North” doesn’t present anything new to the power metal genre. That’s not Last Kingdom’s intent. They take their favorite elements of the mid 80’s to late 90’s bands, mix up the nuances with their tempos and arrangements, and out pops a 9 song, 47 minute record. Probably something that will have longer lasting appeal to the 25 and under sect.