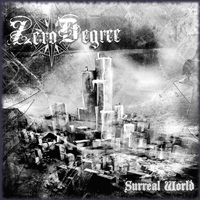 A six piece melodic death metal band from Germany, employing three guitarists allows Zero Degree a chance to still lay down addictive rhythms beneath their twin harmonic lead escapades.  Their debut album “Surreal World” contains 10 songs that live and breathe from the roots of the movement. The production values are primitive and reminiscent of the mid 1990’s, the vocals possess a raspy menacing growl without any hint of clean commercial choruses in their aural jet stream and if you love the early to mid-80’s Iron Maiden dueling nature of guitar competition, then you’ll get your boatload of riffs and solos to analyze and appreciate.

“Disease” opens with a guitar sequence straight out of “Flash Of The Blade” school, only performed with double harmonies, before the tempo see-saws between thrashy Dark Tranquility and conventional, middle of the road traditional metal. “Tomorrow Dies Today” has more of a cultural, In Flames-like atmosphere, leaving you with multiple sing along guitar moments or accents perfect for working out your aggression out in the pit. The band also understand how to fluctuate the speed factor throughout these 10 songs, as “Whispering Age” for instance takes more of a Celtic/ Pagan texture with the drums as the guitars weave their own dance around the arrangement while the title cut features keyboards and odd vocals in the main verses to create futuristic tension.

Zero Degree in their 6 year career has shared the stage with various acts in equally various genres of metal, proving they are willing to appeal to more than the conventional melodic death fan. “Surreal World” may not be the most original take on the genre, but to those who feel that the pioneers have left the station of their starting roots- this band could fill that missing void quite nicely.  Do not let Zero Degree lurk in the shadows- seek and keep the movement alive!